DNV.com.au uses cookies to give you the best possible experience on our site and for marketing purposes. By browsing the site you agree to our use of cookies, and you can click “Close” to remove this message. If you do not want to allow cookies,  go to our cookie settings page and disable. 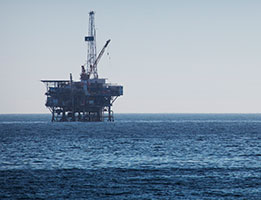 When we started to compare it to other solutions, we could see how Synergi Life ticked all the boxes.
Neil Forrest

Shelf Drilling is focused on providing best-in-class shallow water drilling services to the oil and gas industry. The company bought 37 drill rigs and one swamp barge from Transocean in 2012 and had a tight deadline to get all systems up and running on new QHSE software. They chose DNV’s Synergi Life, and the successful implementation occurred smoothly and right on time.

In September 2012, Shelf Drilling Holdings Limited announced it was acquiring 37 drill rigs and one swamp barge from Transocean. Operations went live on December 1 of the same year. The health, safety and environmental (HSE) management soft-ware initially used for rig operations was the in-house system developed by Transocean. The goal was to have an independent stand-alone system in place by July 1, 2013.

“We started looking for software in January,” says Neil Forrest, Director HSE at Shelf Drilling. “We came from a company where everything was internally developed and we hadn’t needed any external software. So we had never heard of Synergi Life for QHSE. When we started to compare it to other solutions, we could see how Synergi Life ticked all the boxes,” he says.

One key aspect of Synergi Life was DNV’s international presence across the globe for support. Shelf Drilling operates in 11 different countries, including locations in Southeast Asia, India, West Africa, Egypt, Saudi Arabia and Italy. The main competitor on the shortlist for the software was a US-based operation, which would have caused time difference issues. Shortly after signing a Synergi Life contract in February, Shelf Drilling were having meetings with DNV experts in various locations, including China, Poland and also regular meetings at Shelf Drilling headquarters in Dubai. The face to face meetings were important, and plans could be made once an issue was recognized.

The DNV team were both flexible and ready to listen. “We had a workshop in March and the people who came from DNV were very knowledgeable, not only in the software and Synergi Life, but also in HSE. They understood HSE. We would explain what we wanted the software to do, and they would get it,” says Forrest.

“There was one case, where we explained one function we wanted, and at first it was seen as not do-able without customization. But by the time we had finished lunch, the DNV guy understood what it was we needed and had figured out how to do it.”

One part of the equation that simplified matters substantially was that the HSE knew exactly what they wanted from the software, and it involved configuration, not customization. “We were going in with our eyes open,” says Forrest. “We wanted the basics covered in the first phase. We were aware that perhaps the system couldn’t meet our tight schedule, that we would have to make some trade-offs. But it turned out that, more or less, it did everything we needed it to do,” he says.

Synergi Life’s main strengths are, according to Shelf Drilling, that it is comprehensive yet flexible, includes automatic experience sharing via email notification to groups, and that it includes the ability to share cases to the rig fleet, leading to improved procedures. It is more comprehensive than the previous software they were using, but scores high on user-friendliness.

It was tested in the field 15 days before eight rigs went live with the software on July 1, 2013. After it went live, there were no technical issues – only three or four queries on administrative issues, such as ‘I forgot my password.’ The 150 initial users were soon doubled to 300, covering the workforce of 3500 employees on the rigs, with deck crews reporting to department heads.

Forrest says the project, which effectively demanded delivery in less than five months, seemed like an almost insurmountable challenge. “I would have said it couldn’t be done. Of course, it had to be done. Normally that kind of story ends badly, with cost overruns and a solution that ends up functioning badly. That wasn’t the case here,” he says.

The result is a system, Synergi Life, that functions as planned. In the first four months after implementation they had already registered more than 3000 cases. “It’s definitely been a team effort!” he says. “It sets us up nicely for Phase 2 development once we get feedback from the field.”

Why we chose DNV's Synergi Life:

What can Synergi Life do for your company?